Just one year ago, the French Mozilla community was living times of major changes: several key historical contributors were leaving the project, our various community portals were no longer updates or broken, our tools were no longer maintained. At the same time a few new contributors were also popping in our IRC channel asking for ways to get involved in the French Mozilla community.

As a result, Kaze decided to organize the first ever community meetup for the French-speaking community in the Paris office (and we will repeat this meetup in June in the brand new Paris office!) . 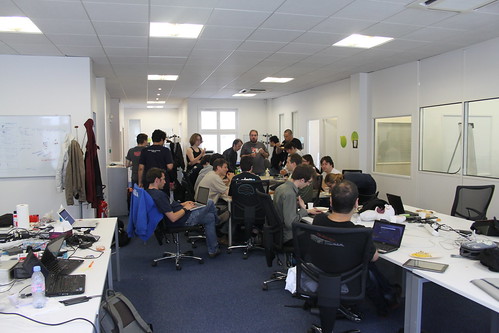 This resulted in a major and successful community reboot. Leaving contributors passed on the torch to other members of the community, newer contributors were meeting in real life for the first time. This is how Clarista officially became our events organizer, this is how Théo replaced Cédric as the main Firefox localizer and this is how I became the new developer for Transvision!

What is Transvision? Transvision is a web application created by Philippe Dessantes which was helping the French team finding localized/localizable strings in Mozilla repositories.

Summarized like that, it doesn't sound that great, but believe me, it is! Mozilla applications have big gigantic repos, there are tens of thousands of strings in our mercurial repositories, some of them we have translated like a decade ago, when you decide to change a verb for a better one for example, it is important to be able to find all occurrences of this verb you have used in the past to see if they need update too. When somebody spots a typo or a clumsy wording, it's good to be able to check if you didn't make the same translation mistakes in other parts of the Mozilla applications several years ago and of course, it's good to be able to check that in just a few seconds. Basically, Phillippe had built the QA/assistive technology for our localization process that best fitted our team needs and we just couldn't let it die.

During the MozFR meetup, Philippe showed to me how the application worked and we created a github repository where we put the currently running version of the code. I tagged that code as version 1.0.

Over the summer, I familiarized myself with the code which was mostly procedural PHP, several Bash scripts to maintain copies of our mercurial repos and a Python script used to extract the strings. Quickly, I decided that I would follow the old Open Source strategy of Release early, release often. Since I was doing that on the sidelines of my job at Mozilla,  I needed the changes to be small but frequent incremental steps as I didn't know how much time I could devote to this project. Basically, having frequent releases means that I always have the codebase in mind which is good since I can implement an idea quickly, without having to dive into the code to remember it.

One year and 15 releases later, we are now at version 2.5, so here are the features and achievements I am most proud of:

A quick recap of what we have done, feature-wise, in the last 12 months:

The above list is of course just a highlight of the main features, you can get more details on the changelog.

If you use Transvision, I hope you enjoy it and that it is useful oo you. If you don't use Transvision (yet), give it a try, it may help you in your translation process, especially if your localization process is similar to the French one (targets Firefox Nighty builds first, work directly on the mercurial repo, focus on QA).

This was the first year of the rebirth of Transvision, I hope that the year to come will be just as good as this one. I learnt a lot with this project and I am happy to see it grow both in terms of usage and community, I am also happy that one tool that was created by a specific localization team is now used by so many other teams in the world